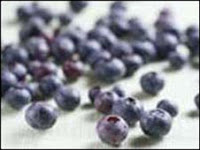 Scientists claim blueberries activate learning and memory in the brain
Eating blueberries can reverse memory loss and may have implications in the treatment of diseases like Alzheimer's, University of Reading scientists claim.
Scientists found adding foods like blueberries to a regular diet, resulted in improvements in memory.
The foods, known as flavonoids, were historically believed to act as antioxidants in human bodies.
But the study indicates they also activate the part of the brain which controls learning and memory.
Dr Jeremy Spencer, from the department of food biosciences at the university, said: "Scientists have known of the potential health benefits of diets rich in fresh fruits for a long time.
"Our research provides scientific evidence to show that blueberries are good for you and supports the idea that a diet-based approach could potentially be used to increase memory capacity.
"We will be taking these findings to the next level by investigating the effects of diets rich in flavonoids on individuals suffering from cognitive impairment and possibly Alzheimer's disease."
The research has been published in the Free Radical Biology and Medicine journal.
Publié par Clément Jutras à 1:59 p.m. Aucun commentaire: